I am a modern romantic

You are cordially invited to the gala grand opening of the George Gershwin Museum of Modern Art. The new museum is home to George Gershwin’s modern art collection—considered one of the finest of its kind in the world. Located in a luxurious limestone mansion on Manhattan’s Upper West Side just off of Amsterdam Avenue. Black tie. RSVP

The above invitation never went out because a George Gershwin Museum of Modern Art was never contemplated, but the size and quality of his art collection easily warranted a museum. Gershwin’s personal art collection was beyond extraordinary—in fact you could easily say it was world class.

Gershwin’s cousin, notable modernist painter Henry Botkin, mentored George on the nuts and bolts of being a painter. Additionally, Botkin assisted his cousin in amassing one of the world’s finest mega collections of modern art. In fact, Cousin Botkin reported it to be, “One of the most significant collections of modern art in America…. It contains some of the greatest examples of contemporary painting that can be found in this country.”2

In the late 1920s and throughout the 1930s the two artist cousins went hunting for the next new thing—visiting New York Galleries and artist’s studios. During the years Cousin Botkin lived in Paris he became Gershwin’s French Connection, helping to expand the collection with European flair. Botkin sent pictures and descriptions of works from his Paris habitat to Gershwin in New York for approval. When George traveled to Paris, the two bohemians went on art quests. The fruit of all this exploration was the discovery and acquisition of big league paintings by soon-to-be but not yet, blue-chip artists.

According to Botkin, Gershwin first became interested in fine art after moving into his new art deco Riverside Drive apartment and showed it to his cousin. Henry Botkin said, “George, the walls are bare! How about some paintings? He said, “Fine. How do we start?”3 The rest is art and Gershwin history!

Cousin Botkin, helped him amass an exceptional art collection. How exceptional was Gershwin’s collection? Get this: in his brand spanking new ultra streamlined Art Deco 33 Riverside Drive apartment, the walls looked like a virtual museum of modern art. The penthouse walls were adorned with works by Modigliani, Renoir, Cezanne, Gauguin, Chagall, Rouault, Kandinsky, Leger, Rousseau, Max Weber, Klee, Siqueiros, Utrillo, Matisse, and even Picasso. Are you starting to get the picture? It was a virtual who’s who of modern art. 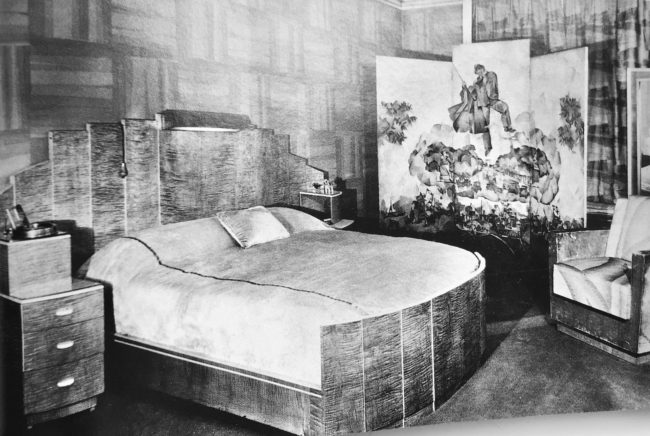 On a terraced bookcase in the living room sat a dramatic angular sculpture of Gershwin’s head by the famous biomorphic sculptor/artist, Japanese-American Isamu Noguchi, created in 1929. Noguchi described the face as, “an exterior of self-assurance verging on conceit does not hide the thoughtfulness of a rich and sensitive nature.”4 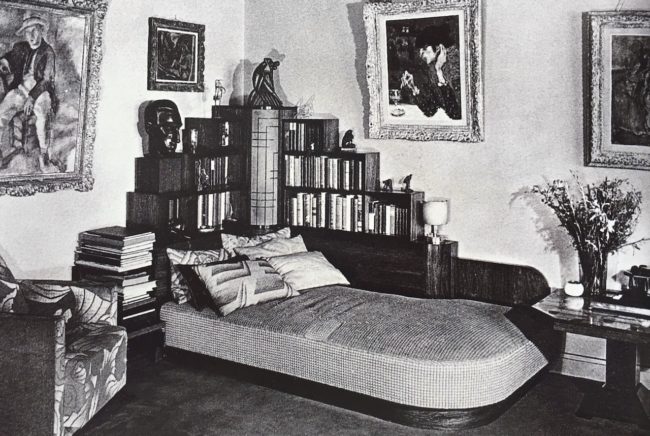 The astounding collection brought Gershwin great pride. In Erma Jones’ 1937 article “George Gershwin, A Lament” she described the tremendous delight Gershwin had for his art collection, “He was also an ardent and extravagant collector. And as Einstein is more pleased with a compliment on his violin playing than with a salute to his mathematical reputation…. As Leonardo was more proud of his repute as a physicist than his prowess as a painter, so Gershwin was more proud of his picture gallery than of his musicianship.”5

Gershwin’s friend, impresario, book designer, artist and art collector Merle Armitage owned a formidable Post-Impressionist, Surrealist artist Paul Klee collection which Gershwin admired. Armitage relates that Gershwin became so consumed in some of his Klee watercolors that Gershwin actually commenced examining them under a magnifying glass. Imagine Gershwin standing in front of a Paul Klee watercolor with a magnifying glass at his friend’s home. Incredible—even to Gershwin, who caught himself midstream and abruptly retreated exclaiming loudly, “What am I doing! My music would not stand up under that kind of scrutiny.”6

Gershwin’s collection swelled to over 140 pieces including drawings, sculptures, water colors lithographs and some sixty oil paintings.7 A 1932 article in Life said of Gershwin’s penthouse apartment, “Paintings hang all over the walls. They stand on the floor, resting against tables and chairs…. They sprawl all over Gershwin’s six-room home, an elaborate establishment as penthouses go in New York.  Maters, and paintings, have reached a point of congestion where the collector is complaining continually that he will have to move into larger quarters…. He already has invested a large portion of his income in paintings.”8

By 1933 the collection was considered so extraordinary that the Art Club of Chicago arranged for an exhibition of Gershwin’s collection. According to Gershwin, Budworth Company was hired for the shipping both ways. George loaned forty-nine oils, seventeen water colors, lithographs, drawings, and three sculptures.9 The “Exhibition of the George Gershwin Collection of Modern Paintings” at the Art Club of Chicago ran from November 10th through the 25th. 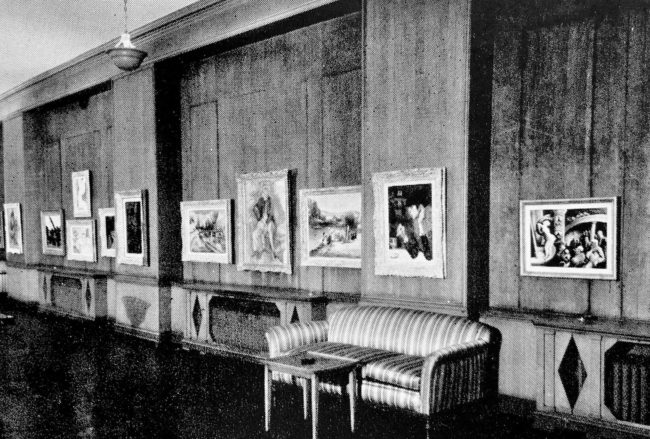 During the Great Depression Gershwin was famous for lending a helping hand as well as airtime to young unknown composers by playing, or having them perform their music on his radio show, “Music by Gershwin.” This benevolent characteristic overflowed into the art universe helping young artists during this era as well. Times were tough and disposable income was scant so George saved many a starving artist with his long outstretched arm. “Knowing the scarcity of buyers in this day and age, he makes every effort to assist the struggling painter” were the words in the article “A Composers Pictures” Arts & Decoration, January 1934. Cousin Botkin chimed in on his cousin’s altruism as well writing, “Some of the most interesting works are the products of the unknown younger painters…. George championed and assisted them at all times.”10

Gershwin’s prized painting, Invocation, by Max Weber in 1919 was a colorful, angular spiritual work. One article declaired, “Mr. Gershwin gets the most pleasure out of his Weber. The painting hangs in the place of honor…. Called Invocation….Mr. Gershwin sees in it a deeply wrought picture, tremendously felt. To him the distortion increases its feeling and adds to the design.”11

After settling into a tony Beverly Hills 90210 zip code mansion that he shared with Ira and sister-in-law Leonore, George missed his New York art collection. Consequently, in September 1936 George sent a letter to his New York secretary, Zenna Hannefeldt, requesting she ship some paintings to his new California abode. The list of fifteen paintings could have easily been the basis for a new museum and included: 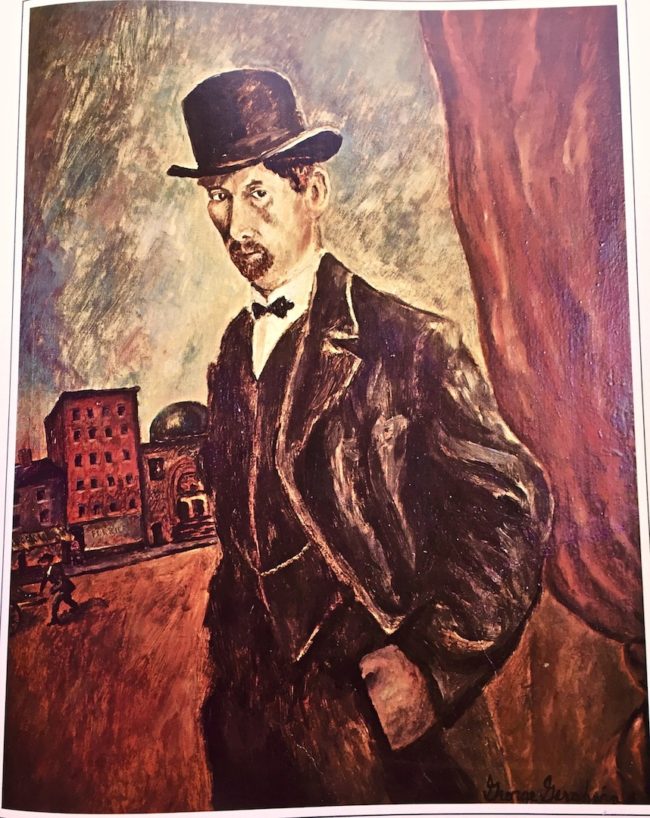 In 2010, Christie’s Auction House auctioned “The Absinthe Drinker” for a whopping . . . hold on tight . . . . $51.2 million! And that was for just one of Gershwin’s more than 140 paintings. When we add up the value of the other paintings, it is safe to say George Gershwin’s art collection would easily top out in the HUNDREDS OF MILLIONS! Not too shabby for a $50,000 investment.

Even though George Gershwin’s collection appreciated phenomenally in value over the years he was not an art investor per say. He was not seeking the largest or fastest ROI (Return On Investment) possible. Money did not motivate his actions. George Gershwin collected works of art that he loved and wanted to live with. He wanted them in his life like old friends and family. Merle Armitage tells us that George, “loved his paintings, he understood them, he caressed them.”14 Although George Gershwin’s art collection ended up being worth multi-millions of dollars, for him, it was an expression of his love for each and every work of art he owned. Indeed, his 1924 tune Lovers of Art really hits a home-run on this score.

Maybe the time is ripe for someone to gather Gershwin’s art collection as well as his own artwork for a Grand Gershwin “Rhapsody in Art” exhibition. Please put my name on the guest list! 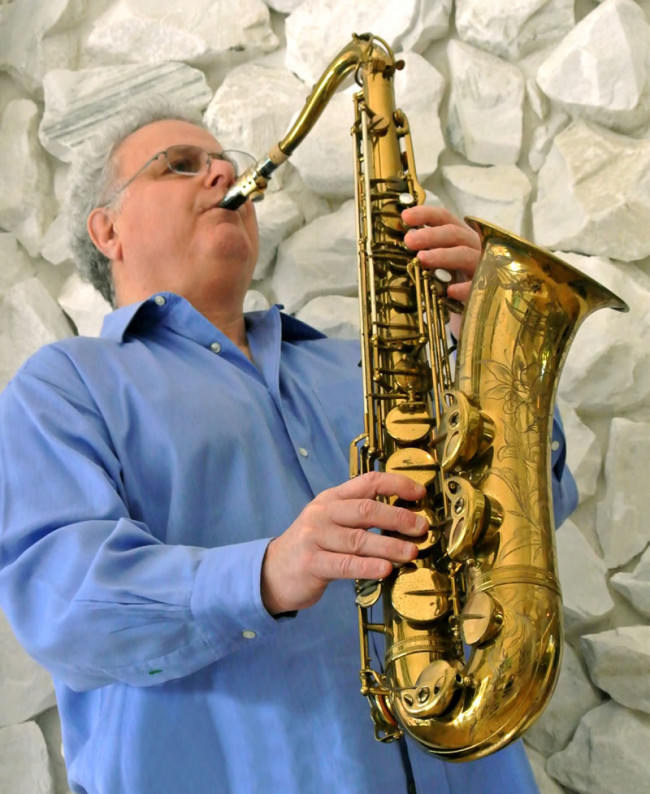 -Author Richie Gerber’s book JAZZ America’s Gift ~ From Its Birth to George Gershwin’s Rhapsody in Blue & Beyond was named to Kirkus Reviews’ Best Books of 2015. For more information visit his website: https://jazzamericasgift.com