Covarrubias’ fresh modern, economical use of line made him the quintessential artist of the Jazz Age, the Roaring Twenties, and the Harlem Renaissance. 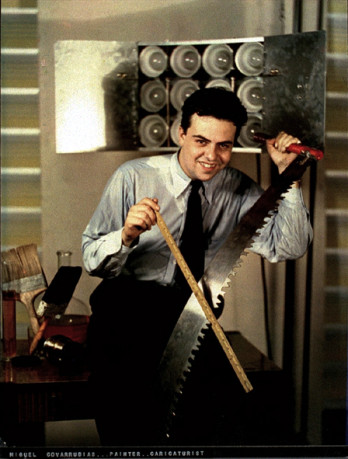 Illustrator Miguel Covarrubias (“El Chamaco”) (November 22, 1904–February 4, 1957) can arguably be called the chronicler of “The Jazz Age.” Moving from his birthplace of Mexico to New York City as a nineteen-year-old in 1923, carrying his pen and sketchpad, he instantaneously took the Big Apple by storm. He shared a studio on 42nd Street with Al Hirschfeld, a caricaturist greatly influenced by “El Chamaco” (“The Kid”—Covarrubias’s nickname).

A-Listers Clamored to Be Covarrubias’ ‘Victim’

Covarrubias’s original, unique, and innovative style of drawing celebrity caricatures catapulted him into a teenage/twenty-something storied celebrity artist, landing him gigs at top-tier magazines such as The New Yorker and Vanity Fair. Ultimately, Covarrubias became one of Vanity Fair’s preeminent caricaturists. “El Chamaco” had a special talent of penetrating and capturing the essence of a celebrity (his “victim”) in caricature, which earned him another nickname “The Murderer.” If one wanted to be an A-list celeb, then Covarrubias had to “murder” you! His “victims” were both terrified as well as delighted to be “murdered” by the satirical pointed pen of Miguel Covarrubias. It has been said that his fresh modern, economical use of line made him the quintessential artist of the Jazz Age, the Roaring Twenties, and the Harlem Renaissance.

One can easily see that Covarrubias was a modern-day renaissance man. Besides writing and illustrating books and creating knockout caricatures, he was also a painter and lithographer. In addition, he developed theater costumes and set designs, including the famous La Revue Negre, which starred Josephine Baker. He was a muralist, cartographer, and a self-taught expert and author of books on ethnology and anthropology.