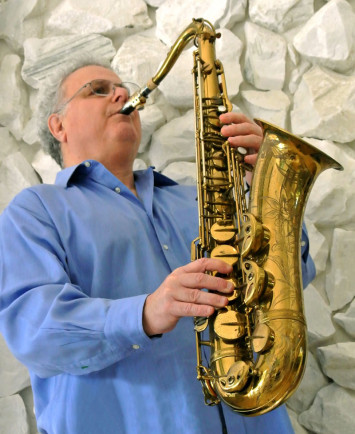 The Brooklyn and Maine Years

During Gerber’s Brooklyn years, he created a solo street act called Alone on the Saxophone, which combined solo sax and stand-up comedy. In 1974, he moved to Maine with his Cuban-American wife, Julie. They moved and renovated a barn into a house and started an organic farm. All the while, Gerber continued to perform Alone on the Saxophone and began leading his newly formed band of Maine-iacs called The Compost Blues Boys. As Gerber’s popularity in Maine grew, he caught the eye and ear of Maine humorist/artist/musician Tim Sample, leader of Tim Sample and the Dubious Brothers. Sample asked Gerber to join the band, and the rest, as they say, is Maine history. Also a talented artist, Sample designed the logo for Gerber’s Alone on the Saxophone act, which is now Gerber’s book-publishing logo.

Gerber and his wife moved to Florida after realizing that Maine had only two seasons: winter and July. They quickly realized that Florida had only two seasons as well: summer and winter (which is exactly the same as summer, except it included lots of folks from Maine, trying to thaw out).
Upon arriving in sunny Florida, Gerber quickly got a gig in the Chip Hoehler Big Band, playing sax on the world’s largest cruise ship at the time, the SS Norway, with some music legends like Frankie Laine (“Rawhide” and “Mule Train” Gold Record hits). After leaving the cruise scene, Gerber started to perform Alone on the Saxophone at various South Florida venues. He also started playing in various bands such as the R&B Soul group The Blue Notes (“If You Don’t Know Me By Now” and “Bad Luck” chart hits) and R&B Rock and Roll Hall of Famer Hank Ballard and the Midnighters (Ballard wrote the smash hit “The Twist,” made enormously famous by Chubby Checker).

In addition to playing sax with various bands, Gerber signed on to create, develop, write, and produce a children’s television show for the Broward County Schools in the early 1980s. The deal included Gerber writing the music as well as the script for a TV show to teach English to the Spanish-speaking children who fled from Communist Castro’s Cuba (known as “Marielitos”) and were attending public school.

The Gerbers bought a small health food store with a juice bar, the Bread of Life Natural Foods Market, in the early 1980s. Gerber’s father had owned grocery stores since the early 1900s, so Richie literally grew up in the grocery business. The Bread of Life grew quickly, compelling the Gerbers to move the business into a much larger storefront and include one of Richie’s dreams: a full-service natural foods restaurant.

This afforded him the venue for weekly jazz performances, which he called Jazz Goes Natural. Upon partnering with Jim Oppenheimer and moving the store and restaurant to an even larger location, Gerber changed the name of his jazz group from The Nutrients playing “music you can assimilate” to The Free Radicals, saying, “It don’t mean a thing if the registers don’t ring.” The Free Radicals performed Friday and Saturday nights as well as during Sunday brunch and featured many world-renowned jazz cats as well as the best jazz musicians South Florida had to offer.

The Whole Foods Years and The Bread of Life

The business continued to boom, convincing the Gerber/Oppenheimer team to open up a second, much larger location. They built a 33,000-square-foot natural foods supermarket, and once again Gerber and The Free Radicals performed on weekends with some of the greatest jazz musicians. As the store’s popularity grew, the natural foods behemoth Whole Foods Markets made the Gerber/Oppenheimer team a deal they could not refuse. In 1997, Whole Foods Markets merged with Bread of Life and formed the Whole Foods Florida Region. Gerber stayed on as the regional vice president and continued the weekend music concerts. After a few years, he retired from the natural foods business.

Pioneers of the Health Food Industry

Being so avant-garde, Gerber had attended Woodstock in 1969. In the 1960s, he was a New York City cab driver and a public school teacher for ten years, first in Brooklyn, then in Maine, and finally in South Florida. While converting the barn into a home and operating his organic farm, la Finca Loca, Gerber also taught T’ai Chi Ch’uan, which he’d learned from master Herman Kauz in New York City’s Chinatown. Leveraging his knowledge as an organic farmer and natural foods store owner/operator, Gerber became a licensed nutrition counselor and went on to produce and host The Natural Grocer Radio Show for ten years, the longest-running health talk radio show in South Florida at the time. In 2014, the Gerbers were included in Natural Prophets, a book about the pioneers of the health food industry.