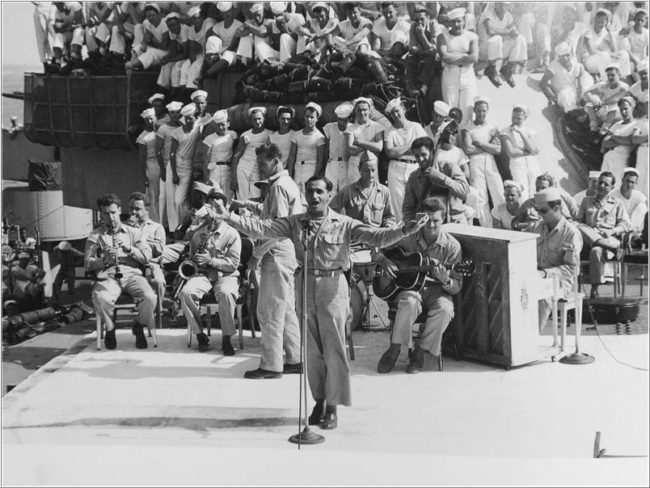 Exactly when, where, and why Berlin wrote “White Christmas” is shrouded in speculation, but we do know that he wrote his songs to appeal to the masses—and in the United States at the time, everyone seemed to be celebrating this festive holiday. But you don’t have to celebrate Christmas to get what this song is about: yearning for home and the love of family. Regardless of one’s religion, this is a theme that plays out in all of our lives, and Berlin knew how to tug on our heartstrings. According to some sources, he said that this was the best song he’d ever written, the best song anyone had ever written. And, you know, he was probably right.

Although “White Christmas” has been sung many times, many ways by various artists, including Elvis Presley (to Berlin’s chagrin), in the over 75 years since it was written, the most popular version was sung by the bass-baritone voice of our friend Bing Crosby. His record-breaking single debuted in October 1942—twelve years before the movie of the same title. Bing’s voice and Berlin’s words made their way to the playlist of the Armed Forces Radio and to the ears of American GIs oversees who really were dreaming of a white Christmas. In fact, this sent the song’s popularity skyrocketing (almost hitting Santa and his sleigh). It made it to #1 on the Billboard Charts and remained there for 11 weeks. It made its way back there in ’45 and ’47, too.

I can only imagine how the soldiers felt as Crosby’s melancholy croon brought back memories of Christmases past in those early months of World War II, as they faced the possibility they’d never see home again—let alone a white Christmas. Still, I like to believe that it brought those brave, homesick men some measure of comfort despite its tearful message. I also like to think those simple 54 words and 67 notes (yes, that’s it!) will brighten the heart of all who hear them this season.

So, from this Hanukkah-celebrating Jewish boy, I want to wish you a Merry Christmas . . . May your days be merry and bright, and may all your Hanukkahs be filled with light.